Is it really surprising when a Dividend Aristocrat increases its dividend? After all, companies selected to be part of the index have a proven track record of increasing dividends. Regular dividend increases for more than a quarter of a century lands the stock in this prestigious group.
Healthcare giant Medtronic (MDT) is firmly part of this select and exclusive group. After increasing dividends for nearly 39 years. Impressively, the MDT dividend has expanded by an average of 20% every year for the past four decades. The MDT dividend is now a force to be reckoned with.
So, if there’s ever a stock that investors can blindly expect a dividend from its MDT. which is why no one was surprised when the company hiked its dividend by another 7% this year. Announced in June, 2017, the company will now pay investors an annualized MDT dividend of $1.84. Considering the stock price is currently at $86, the yield works out to a reasonable 2.14%.
The fact that the company’s yield is barely average and this is the fortieth increase in a row makes this news less than earth-shattering for sure. But is there more than meets the eye? Is the MDT dividend share worth buying at the current price despite a run up in the stock price and a suppressed yield? Here’s a closer look at what makes the MDT dividend tick:

Perhaps the largest medical technology company in the world, Medtronic is a multi-billion dollar healthcare giant. The company come a long way from the tiny medical device repair shop it used to be in Minneapolis.
Brothers in law Earl Bakken and Palmer Hermundslie started the company in 1949. The shop was successful in creating a network of local doctors and clinics that reached out to them when devices needed repairs. One of the doctors who regularly visited the shop decided to work with the two men to solve a complex medical problem.
Heart surgeon C. Walton Lillehei from the University of Minnesota Medical School was frustrated with the pacemakers available to medical professionals at the time. These pacemakers were huge and complicated devices that had to be plugged into a wall socket to keep a patient’s heart pumping. In case of a sudden power outage, the pacemaker would stall and many patients would die. After experiencing such a tragic event firsthand, Dr. Lillehei decided to work with Bakken to develop a new pacemaker that could work with independent batteries.
When the redesigned transistorized metronome and battery-powered external artificial pacemaker were perfected, the company took it to market with great success. The company quickly expanded by selling medical equipment manufactured by other firms alongside its own patented technologies and new designs.
Multiple patents, partnerships, and acquisitions later the company is now one of the largest medical equipment suppliers in the world. The company is now based in Dublin, Ireland and employs more than 98,000 people worldwide. It’s six main business units brought in a combined $28 billion in revenue in 2016. 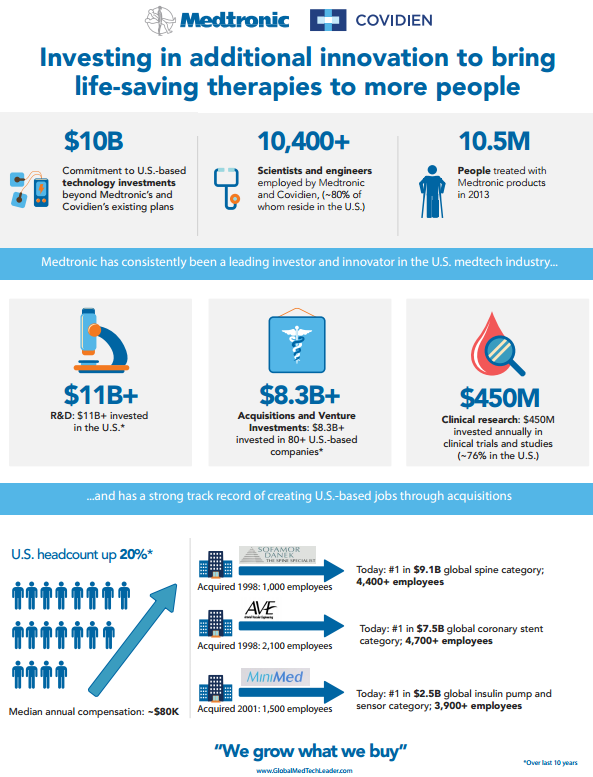 Growth for Medtronic stems from acquisitions, research and development investments, and expansion in emerging markets.
Over the years the firm has built up a reputation as a medical tech innovator. With nearly 7,000 patents and a consistently high degree of investment in research and development the company has the potential to create new avenues of treatment relatively soon. Over the past year the company has invested nearly 7% of its revenue on R&D.
The growing portfolio of medical devices, from instruments that seal medical vessels to robotic systems, help the company diversify into treatments for various new and rare medical conditions.
Aiding this drive into new medical treatments is the management’s ability to seek out smaller acquisition targets. Over the years the company has absorbed several companies that have helped it advance into new fields and expand its portfolio of products. The most recent acquisitions of four small tuck-in companies throughout 2016 helped the company expand its services in areas as diverse as orthopedics and gynecology.
The nearly $50 billion acquisition of Covidien helps the company reduce international taxes and expand its services in emerging markets like India, China, and Africa.

Medtronic’s competitors are close on its heels in the healthcare sector. Several big and small players are trying to chew a bigger piece of the healthcare pie. In 2014, for example, Dexcon (NASDAQ:DXCM) and a division of Johnson & Johnson (NYSE JNJ) got approval for a device called the “Animus Vibe”. It’s a set of instruments that can communicate with each other in order to help people control their diabetes. The Dexcom sensor collects data from the glucose monitor and speaks to the pump.  Other companies such as Tandem Diabetes and Insulet Corp are also filing patents and getting approvals for new technologies in this growing market. This is an example of innovation in MDT’s home turf.
Medtronic’s diversification and resources help it guard against these lingering threats. Perhaps the most appealing thing about the MDT dividend is the consistency. Medtronic has paid an increasing dividend regardless of the macroeconomic conditions. This is because its products and services are absolute necessities. During the recent financial meltdown between 2007 and 2009, sales grew at a consistent pace between 8-10% each year.
While sales continued to grow, the stock price fell precipitously in 2008. From a high of $54 to a low of $29, the stock was nearly cut in half and the company had to adopt more aggressive restructuring of the sales team to keep going.
Over the past five years the company’s sales have grown at a consistent pace of 13.2% CAGR.

At the end of the financial year in 2017, MDT brought in $29.7 billion in sales. It also brought in a total of $4 billion in net profit. Although the payout ratio has ticked up in recent years, the company pays nearly one third of earnings as dividends. Payout ratio last year was a hefty 59%.
The company paid out an annualized dividend of $1.84, which is a yield of 2.1%. Not bad for a Dividend Aristocrat, but certainly lower than most high-yield income stocks.
The MDT dividend is also augmented by the generous buyback program. MDT intends to spend over $5 billion in buy backs over the next few years.

Nevertheless, the valuation seems a bit off for the moment. PE ratio is 30, PS at 4.18 and PEG at 2.44. All of these are above industry averages and the company’s own historic means.

Medtronic is a record breaking dividend payer in the true sense. Management has kept the payout ratio high enough to sustain the compounding dividends for all these years. The stock price has surged over 25% since the start of the year, which could be the reason the yield seems so low. Meanwhile, all the valuation metrics (PE, PS, PEG) indicate the company’s stock is overvalued. While there’s no doubt this is an excellent healthcare stock, the MDT dividend simply seems out of reach for the value buyer right now.

« Previous: A Closer Look At A Unique Monthly Income Investment – Realty Income Co. (O)
Next: Top 6 Stocks That Have Increased Their Dividends Recently »