‘Yield’ is a very appealing word for income seeking investors. We often talk about the dividend yield on stocks and the yield on certain other assets. But we’ve never mentioned a growing class of securities that have appeared on the investment scene in the past few decades – yieldcos.

Yieldcos are a clever way to attract capital to income-producing projects. These instruments gain investor attention by offering up an undeniably great yield. Often, the yield is higher than dividends on the stock market, the capital is invested in stable and long-term projects, and the whole structure is focused on creating wealth for everyone involved.

Here’s a close look at these fascinating financial securities:

The History of Yieldcos

Yieldcos can trace their history back to the most popular form of yield-based investments – master limited partnerships (MLPs). MLPs are basically partnerships that trade on the stock market. When you buy a MLP, you effectively become a partner. That means you only get taxed when the firm distributes profits and can enjoy access to the public markets meanwhile

MLPs got their start in the 1980’s. Today, there are nearly 120 different MLPs trading on the market with a combined value of over $600 billion.

Yieldcos are very similar. They trade like any other stock on the market, but are designed to only invest in assets that can generate a stable stream of cash flows.  They were born out of a need for capital in the clean energy industry. Solar and wind developers needed a new form of asset class to attract cash investments for capital-intensive projects. In return, these securities would promise a healthy and constant return derived from the revenues on electricity produced.

The developers can float these securities on the stock market, get cash for developments, and pay investors from the long-term contracts on electricity production and supply.

The structure of yieldcos is pretty straight-forward. These are separate corporations that own and manage specific assets that can produce regular cash flows.Solar and wind developers spin off certain energy-producing assets to list on the stock market so that income-seeking investors can get limited access to the cash generation without having to expose their assets to risk.

The advantage with this structure is that the cash flows are reliably predictable. Energy companies usually get the energy-producing assets up and running. They sign long-term contracts with utility companies or corporate clients to supply energy at a fixed rate for multiple decades. This portfolio of cash generating assets can be spun off from the parent company as a separate organization. Because the cash flows are so reliable, investors can enjoy quarterly dividends and annual updates on how much cash is available to distribute as dividends.  Yieldcos can also make forecasts about when and how much the dividends will increase or how the distributions can be made tax-efficient.

Around the time of their IPOs most yieldcos offer 4% yields.Now, after the boom-and-bust cycle, the average yieldco can yield between 3% to 11.5%.

In a report called Crossing the Chasm, Deutsche Bank detailed all of the benefits of yieldcos for investors and issuers. The structure allows investors to gain exposure to the booming renewable energy sector without much of the downside risk of risky investments. The yieldco provides a return from long-term contracts that are highly predictable. Risky investments are kept away from the structure. 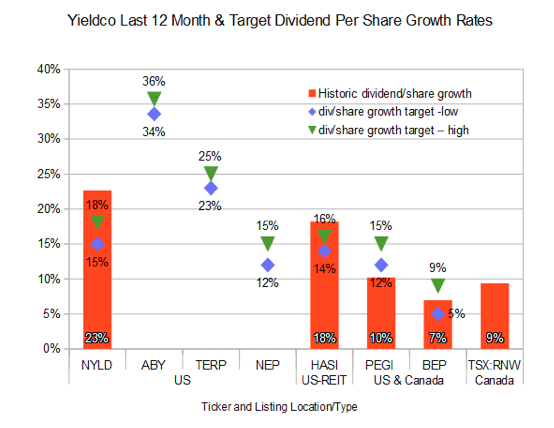 Investors can value the security more easily because of the relative predictability of cash flows. Solar companies can adopt an IDR structure to benefit from the long-term growth of the yieldco.

As assets grow and become profitable over time, they can be included in the same security and augment earnings for investors.

New and clever financial instruments can often get investors excited. When investors go overboard without fully understanding the risks, securities go through a boom-bust cycle. Something similar played out in the yieldco space over the past decade.

From 2013 to 2015, yieldcos were remarkably popular and booming. Several new yieldcos listed on the stock exchange, including Brookfield Renewable Energy Partners, Pattern Energy Group, Hannon Armstrong Sustainable Infrastructure, and TerraForm Power. In mid-2015, Global X even launched an index ETF under the ticker YLCO that tracks the yieldco space. More than fifteen different companies had raised a jaw-dropping $12 billion for new clean energy developments by 2015.

This was clearly a boom and everyone wanted to get involved.

The problem with this structure was the over reliance on the parent company for growth. Mismanaged funds coupled with a sudden drop in solar panel prices, electricity and oil have left many clean energy companies over-extended. Some have struggled with mounting debt, as they piled on more leverage to keep pushing growth that ultimately proved unsustainable.

A good example of this collapse is SunEdison. Once the largest solar energy company in the world, Sunedison floated two separate yieldcos before it filed for bankruptcy last year. Sunedison eventually spent so much money to keep growing that it drove itself to the brink and had over $16 billion in liabilities by the end of the process.

Despite the boom and sudden bust, yieldcos still have a lot to offer. They can be particularly lucrative investments for income-seeking investors. So long as they’re associated with a parent with a healthy balance sheet and a clear risk management strategy.

There’s no doubt the clean energy sector is still remarkably risky and most firms in the industry could struggle to find the right balance. Nevertheless, healthy yieldcos could still be attached to healthy companies.

According to Christopher Radtke, managing director for power, gas & renewables at Credit Suisse, better quality and more sustainable yieldcos are starting to appear on the scene. These yieldcos can be better bets for future investors. Companies that focus on the core operating assets and its growth potential have the ability to raise funds on the public market and put it to good use. Efficient capital allocation and low debt can signify a healthy yieldco that does what it intends to.

Experts believe that yieldcos still offer some great benefits to investors who are willing to do their research. For one, the cash flows are based on contracts signed with investment-grade mega corporations that stretch out for two decades. Also, yieldcos are not subject to the shifting price of commodities., Interest rates play a much bigger role. Also, yieldcos can help make wind and solar companies more vigilant and transparent. Having a publicly listed entity with all the cash-generating assets adds a little pressure on management o keep the ball rolling.

Altogether, if you’re willing to dig deep and understand specific yieldcos you could discover a good investment opportunity in this nascent market.

Yieldcos are a fascinating concept. Not only do they help fund renewable energy projects but they also offer stable, healthy, and predictable returns. That means the average income-seeking investor can buy into a green revolution, help save the planet, and get a sizable return on investment.

However, despite their utility and simplicity, yieldcos have experienced a topsy-turvy ride for the past few years. The boom has suddenly turned into a bust and many companies have suffered as a consequence. ETFs and yieldcos currently on the market have flat-lined over the past year, yet they have continued to pay out handsome dividends every quarter.

If you’re looking to invest in these specialized instruments, do your research thoroughly. Understand the relationship between the sponsoring parent company and the listed yieldco. A healthy parent usually manages a healthy yieldco. Look for signs of financial strength in the balance sheet of both entities. See where the cash comes from, how long it can be sustained,. And how much it can grow over time.

A well-picked yieldco could certainly make a valuable addition to a balanced dividend portfolio.

« Previous: Dividend Aristocrat of the Week: Federal Realty Investment Trust (FRT)
Next: Everything You Need To Know About Mortgage REITs (mREITs) »