In the heart of Louisville, Kentucky is a corporation with perhaps the most unique collection of alcohol brands on the planet. If you’ve ever tried a fine glass of exquisite Jack Daniel’s or Woodford Reserve whisky, or admired the Chambord liqueur bottle, you’ve come in contact with one of this company’s wide-ranging brands.

Despite being one of the largest wine and spirit manufacturers in the world, the Brown-Forman company is still a family owned and operated business. Nearly 70% of the voting rights in the company are controlled by a little over 40 members of the Brown family, all of whom are direct descendants to the company’s founder.

Last year, the company made nearly $3 billion in revenue and topped up its annual dividend by 7.4%. This marked the 33rd consecutive year of dividend growth for the company, firmly entrenching it in the Dividend Aristocrats Index. This week, we’ll take a closer look to see the magical cash generating ability of fine wine, tasteful whisky, and luxury liqueur.

George Garvin Brown started off as a pharmaceutical salesman in Louisville back in 1870. His experience with medical containers led to a novel idea – selling premium whisky in sealed glass bottles. At the time no one knew whisky could be sold like that. It was always sold in barrels.

Brown got together $5,000 with the help of his brother and set up the company with an accountant (later partner) George Forman.

Old Forester Kentucky Straight Bourbon Whisky was the company’s first major brand. After decades of expansion, the company now owns seven whisky brands including Woodford Reserve and Canadian Mist, three brands of scotch including The Glendronach and Glenglassaugh, two brands each of wine, liqueur, and vodka, and three brands of tequila.

Revenue reached $3 billion last year for the very first time. Sales are now spread across the world, but amount to more than $1 million only in the United States. Other parts of the world, including India, China, and Europe are soon catching on.

The company’s recent financial statements expose a management that has helped the company grow at a low but steady pace. Average annual growth has been close to 8% over the past few decades, while the return on invested capital (ROIC) is close to 30%.

Free cash flow at the firm is nearly at the same level it was eight years ago. That means the level of free cash flow has remained pretty much the same for all these years. Part of the reason for that could be the heavy capital expenditure the company has been doing over this period. Between 2009 and 2016, the level of CapEx doubled, mainly due to aggressive investments in new flavors of Jack Daniels and a new range of other spirits. The company has not been shy to invest in the right brands or right opportunities and the results of all this investment could become clearer down the line.

Unfortunately, that means the company is also rather conservative with its dividend payout ratio. The ratio is currently just under 25%. Although dividends have grown at an annual rate of 9.6% every year over the past five years, the dividend yield is currently only 1.5% 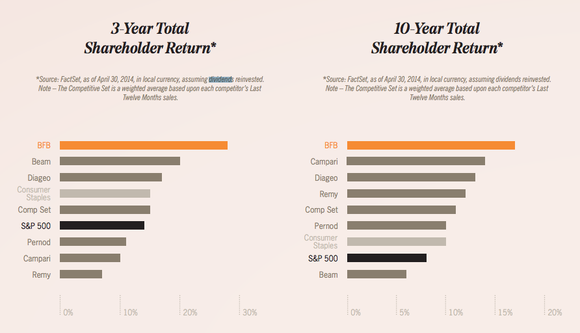 Considering the payout ratio is so low, the dividend discount model isn’t a particularly good fit, but we’ll give it a go anyway.

The dividend paid last year was $0.73 (annualized). The Weighted average cost of capital (WACC) is assumed to be 11%. Growth in dividends has averaged 9% in the past few years. So the valuation is $36.5. Considering the share price is $48.40, it’s no surprise that the stock is 33% overvalued by this measure.

But what about other ratios that don’t depend on free cash flows or dividends. How about a comparison of the firm’s P/E ratio to both the industry average, historic average, and justified PE ratio?

Here’s a look at how these ratios stack up:

Note that the industry average is an average PE ratio of some of the company’s closest rivals (Constellation Brands and William Valley vineyards) and the justified PE ratio is based on the payout ratio, growth rate, and WACC assumed in previous calculations.

On the basis of PE ratio, Brown-Forman seems undervalued. Whether you pick the PE ratio or the dividend discount model for this Dividend Aristocrat depends on you.

Brown Forman is an interesting dividend stock pick. It’s got a fascinating history, a track record of dividends, and great management. The portfolio of brands marketed across the world have some serious clout and sales can be expected to keep growing. Dividends are fairly stable and have a ton of room to grow too.

The only issue is the valuation. Although I wouldn’t buy at the current price, a growth-seeking investor with confidence in the company’s future plans for expansion can buy in.

« Previous: The 4 Best Dividend Stocks That Pay Monthly
Next: Dividend Aristocrat Of The Week: PepsiCo (PEP) »